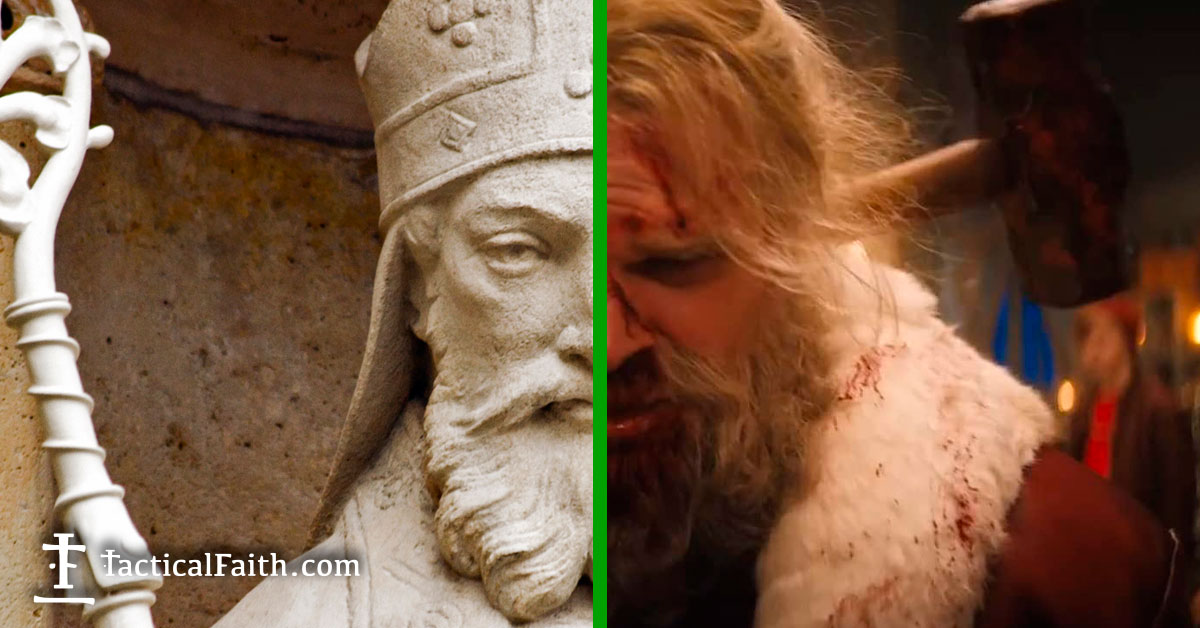 There is no doubt about it, the new Violent Night movie looks to be a bloody fun flick. Who wouldn’t want to see David Harbour taking on the role of Santa Claus and trouncing a bunch of really “naughty” villains. If you aren’t familiar with one of the newest “Christmas” movies of the 2022 year, then just do a Google search. I’m not necessarily interested in seeing it or really promoting it. The thing that has peaked my interest in this movie is that it shows the major drift that our culture has taken on the specific person of “Santa Claus” or as I like to call him “Saint Nicholas, Bishop of Myra”.

What drift do I speak of you might ask? Well, the person of Santa Claus is just one way in which our current culture has more or less bastardized the historical nature of Christmas. The character of Santa Claus is based on a Bishop. Christmas is based on the greatest gift to mankind. However, in the movie Violent Night (Spoiler), he seems to have flashbacks of being a violent barbarian or viking, whose weapon of choice was a large hammer. I’ve even seen some internet sites that falsely attribute the historical underpinnings and attributes of Santa Claus to Thor, the Norse god associated with lightening and Chris Hemsworth. I’m pretty sure that Violent Night is drawing on these “Christmas is Pagan” ideas that float around this time of year. The big problem here is that Thor was a Germanic mythological character and St. Nicholas is actually based on a Greek father who attended the council of Nicaea. Maybe he had one recorded bout of violence, but we’ll get to that later. On the whole (99.99999% of the time) St. Nicholas was a very peaceful and godly man.

My interest in this article isn’t to compare and contrast Thor or Violent Night and Saint Nicholas, however fun that might be. My project is simpler. I want to remind folks just who St. Nicholas is, why he is related to gift giving, and his association toward caring for children and women. Finally, I want to talk about the motivations of a man like St. Nicholas and why he has gone down universally in history as a good man.

Starting out with one of the most obvious things about Nicholas, was that he was a Christian and a Bishop. As stated before, he was the Bishop of Myra, which is located in modern day Turkey. At the time, it was part of the Byzantine/Roman Empire. The traditional dates of his life are from March 15th, 270 to December 6th, 343. Now if that December date causes you to raise an eyebrow, that’s because the Eastern and Western churches celebrate the Feast of St. Nicholas in December, in commemoration of his death. So, we find the first piece of the puzzle. It’s easy to see why we associate him so strongly with Christmas. The great news is that being before the Great Schism almost all Christians can claim him as an example. Catholics, Orthodox, Protestants, Evangelicals, and Pentecostals. Sorry Puritans. You guys tried to abolish Christmas because it was too “popish” and therefore you don’t have any dibs on Santa!

I’m going to run this into the ground. St. Nick, or Santa Claus was a Christian. He wasn’t even a convert to Christianity, as could easily be the case, since in the 4th Century, Christianity was in a major growth period. Nicholas was actually born to fairly wealthy Christian parents who raised him as a Christian. The traditions vary on his family a bit, but that idea is a pretty consistent narrative. When his parents died, he was reminded of the words of Jesus to the rich young ruler “sell all you have and give it to the poor and follow me.” It’s not entirely clear how quickly he did this, or if he slowly gave his wealth away over time, but because of this act of generosity, he found himself appointed as a bishop. The Bishop of Myra!

As the Bishop of Myra, he is credited with no small amount of charitable giving, stewardship, bravery, and miraculous events. This is where my more protestant leanings tend to get the better of me. I mean, I believe God can do miracles through us, but I want to be careful about parsing out history from myth. That being said, much of the traditions surrounding Nicholas are very much the reasons why we associate gift giving and a love for children to him. As a Bishop in the early church, this makes Nicholas an early church father. Not one we have writings from, but one that is historically attested, and was fairly influential in his particular time and place.

What kind of traditions can we link to our modern interpretations of Santa Claus?

The idea that he cared for the poor and needy is kind of an idea that is lost on us in our modern tellings of Santa Claus. That all children should be loved and cherished is something we take for granted in our current milieu. But in the last days of the Roman Empire, children were sold off as slaves on a regular basis. Not because parents didn’t love them, or want to keep them, but because sometimes being a slave or indentured servant was the only feasible way to put food on your table. Women and children typically fall into this group in Ancient Rome, but young women especially. Life was harsh across the board, and taking on another person in your family was nothing short of a major economic strain. As such, a father needed to offer up a dowry to the future husband of his daughter. If the family of the girl was poor, then no dowry could be offered up to perspective suitors. This typically resulted in a very likely case that the daughters would have to be sold into some kind of slavery. What do these outdated and horrific practices have to do with with Santa Claus? I’m so glad you asked!

The Dowry of the Three Virgins is one of the more widely attested traditions about St. Nicholas. As the story goes, there was a poor father who had three beautiful virgin daughters. The father, was heartbroken that he wasn’t able to offer up not one, but three dowries for any of his girls. If no dowry was to be given, then the prospect of some kind of slavery or even prostitution (which is a form of slavery) lingered heavy over the future of these young girls. Being a pious man, it is said that Nicholas went under the cover of night and threw or placed three bags of gold into a window. Traditions state that these purses of gold landed in stockings or shoes that were being hung or dried in front of a fire. The father now had the needed dowries to marry off his daughters, so that they would be saved the shame of being unmarried. As one tradition goes, these all happened on separate nights, and the oldest daughter was the first to be married off. When the second bag appeared, the father stayed up to see if a third purse appeared, and he caught St. Nicholas in the act of charitable and anonymous giving. The father fell upon his knees and thanked Nicholas. Nicholas’ care for these young girls and love for them, carried such weight in Christian traditions, that it is still practiced in many Scandinavian countries. Children wait for “St. Nicholas” to put gifts under their pillows and in their stockings. It is worth noting that the traditions surrounding this story place heavy emphasis on the plight of the girls, and show Nicholas’ compassion specifically for them. These stories have helped inform our notions about caring for the poor, and assigning equal dignity to all humans. Male and female.

Other stories tell of how Nicholas saved three innocent men from being executed. That he even placed himself in great peril going against the wishes of the governor. Another story tells of Nicholas discovering children who either died or were in great peril at the hands of a horrible butcher, with some stories stating that when he prayed for the children, they were miraculously returned to life.

The last story I will tell is one that we can all relate to in some way form or fashion. As a Bishop and being so close to Constantinople (the new capitol of Rome) Nicholas was in attendance at the Council of Nicaea in 325. Not to go into too much detail about why the Council was called for, the main antagonist was Arius. Arius was the propagator of the “Arian” heresy. This was a question over what the nature of Jesus was. Was he of “like substance/essence” or was he of the “same substance/essence” as the Father? Arius believed that Jesus was of a “similar essence” to the Father, but not of the same essence. The other side attested that no, Jesus was of the same essence (Homoousian) as the Father. St. Nicholas was on the side of what is considered orthodoxy, and thus did not like the idea that Arius was spouting off that Jesus was something less than the Son of God. Being frustrated with Arius or one of his proselytes, St. Nicholas slapped or punched one of the offending heretics. Constantine did not approve of this gesture, and had St. Nicholas thrown into a holding cell or prison of some kind, even removing his status as a bishop temporarily. This is a story that is disputed, but because it seems to have the “criteria of embarrassment” associated with it, I’m convinced it really happened. Why would later Christians make up a story that would cast St. Nicholas in such a bad light? Because it’s not made up and Nicholas, like many other Bishops of his time held strongly to the tradition and doctrine of Jesus being the only son of God. Even Saints loose their temper every once and a while.

St. Nicholas was a Christian, and a devout, even dogmatic Christian. These ideas are lost on us at Christmas time and I think it’s a bit of a travesty. It’s bad enough that Christmas is so commercial and materialistic. So here we are, fighting for the true meaning of Christmas as well as the secondary, and tertiary figures surrounding this holiday season. St. Nicholas was motivated to help children, give to the poor, and care for women who could so easily be forgotten in the era that he was living in. Through his example and determination, we have a major symbol of Christmas that shines through the ages, because of his love and devotion to the faith.

Why do we need counseling? Eric Venable